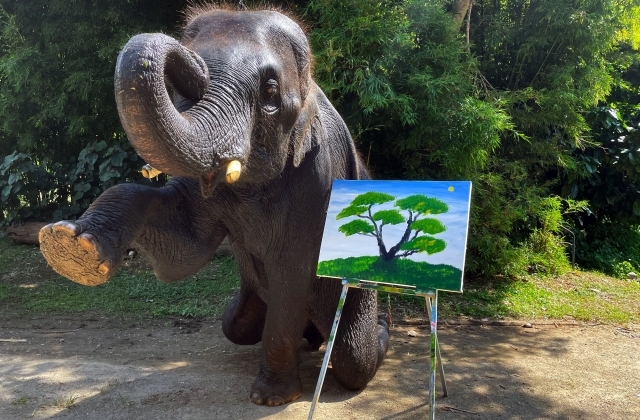 BitTrunks is the NFT unit of Elephant Art Online (EAO) and has announced the launch of its new non-fungible token featuring artwork painted by an elephant. The object is said to be the world’s very first NFT artwork made by the largest living animal today.

The most recent NFT art was created by the 7 year old elephant named Tunwa. He was born and raised at Maetaeng Elephant Park & ​​Clinic located in Chiang Mai, Thailand.

Tunwa’s digital art has been described as unlike anything seen in the art world before. His NFT package will include a video and photos of how the elephant made his work of art. People will be amazed at how he was able to control the brushes and form the designs on the canvas with beautiful color combinations.

Tunwa (TW) painted the painting “The Tree of Life” using his long trunk. He skillfully controls, moves and dabs just enough paint to complete his masterpiece. As reported on the EAO website, this elephant child has been painting for about three years now.

Additionally, BitTrunks’ new NFT featuring Tunwa’s art will also come with valuable additional content such as takes of Tunwa painting his daily life with clips of him interacting with other elephants. A digitally verifiable certificate of authenticity or a QR code of the painting will also be provided.

“We are delighted to present to collectors and investors the first symbolic painting by the world’s most talented and artistic elephant,” BitTrunks co-director Dwain Schenck said in a press release. “This is a first in NFT space for the world’s largest land mammal to create a non-fungible token whose qualities rival those of a human artist.”

Schenck added that Tunwa’s NFT is also a historically unique investment where part of the proceeds from sales will go to the elephant park to help support where Tunwa and more than 80 elephants live. BitTrunks will also direct some of the money to a medical clinic that the park also runs.

Finally, as posted on the OpenSea NFT Marketplace, BitTrunk’s “Tree of Life” NFT TW Art Auction will open on October 28 at 9:30 a.m. ET and close on November 4 at 12 p.m. EST. In addition to the ownership of the NFT, the winner will receive the physical canvas of Tunwa’s painting.