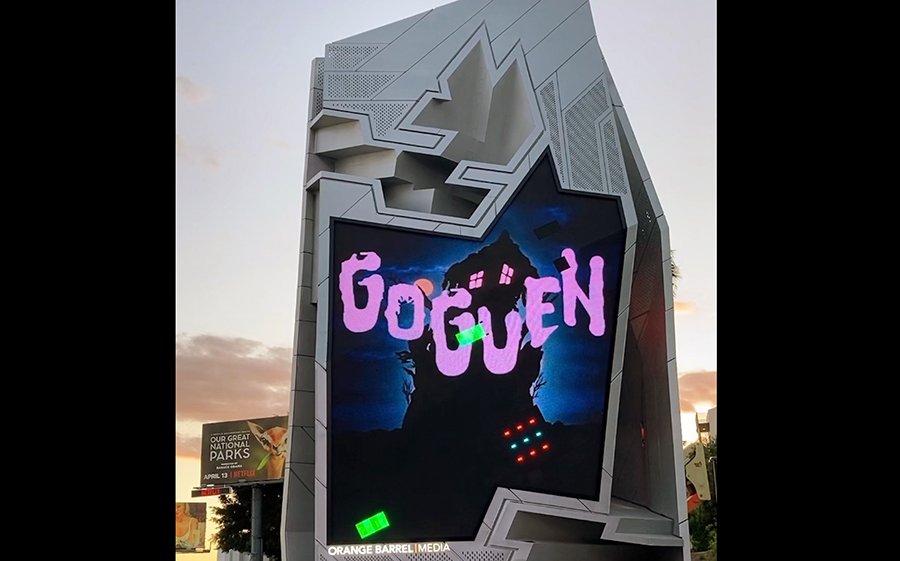 Currently on view, an experimental animation by Aimee Goguen, titled “Title Sequence” (2022). Born in Burbank, Goguen pays homage to the classic cinema that shaped her queer youth in Los Angeles. Inspired by the exquisite corpse-like exercises that helped her learn animation, “Title Sequence” isolates fonts embedded in our cultural memory of the film, making the title the main event and Goguen the star of the show.

Goguen’s work screens at the top of each hour alongside video from Cauleen Smith and Pipilotti Rist. Stay tuned for more presentations by Eve Fowler, Nao Bustamante and Lukaka Branfman-Verissimo representing ONE on the Sunset Spectacular.

Designed by architect Tom Wiscombe, the West Hollywood Sunset Spectacular is a 21st century multimedia billboard. It is designed as four giant parts: three outer planes with a nested “tesseract” inside. The tesseract is tilted, seemingly oriented to align with something other than Earth’s gravity; it intersects the exterior planes, creating giant figurative involutions. The entire structure is subdivided not into human-scale sticks and panels, but rather into pieces resembling oversized puzzle pieces, each built to stack and fit together with little human labor. Rather than being defined by an ingrained architectural hierarchy from mass to detail, the project maintains a consistently low resolution relative to human scale, as if created by much larger beings. It rests on a floor that stands out from the ground like a magic carpet, defining a discreet world nestled in the city. The cornerstone of the Sunset Spectacular is Arts on Sunset, an ongoing public digital art project developed by Orange Barrel Media and curated by curator Diana Nawi.