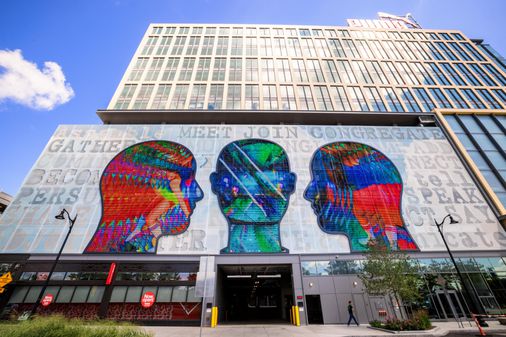 ‘The Conversation’ digital art installation at Assembly Row says it all

Somerville’s latest public art installation is designed to get everyone talking.

“The Conversation,” a six-story LED screen hanging from the facade of 455 Grand Union Boulevard in Assembly Row, depicts three heads – one facing forward, one right, and one left – which are canvases for the works of art. digital art by local and regional residents.

The piece went live at 1 p.m. on August 24 with the work of five artists: Studio HHH directed by Vanessa Till Hooper – who also selected the pieces for display – Pamela Hersch, Callie Chapman, Zebbler and Bruce Rosenbaum. Hooper said that in researching regional artists to present, they opted for those with an LED content experience, resulting in a series of slow, vivid and saturated digital artwork.

The main content created by Studio HHH, also known as “The Conversation,” features soundless videos of residents of Somerville and Cambridge that the studio recorded on an outdoor film set as they actively listened to others.

“We are in this state of the world where we think it is really essential to discuss more,” said Hooper. “We get away from each other a bit when you have a meaningful conversation or exchange. “

The digital canvas, Hooper said, is in rotation, which means different selections of content will play at different times of the day in different orders, with new arts being introduced and old ones being phased out.

“The message I really want people to see is that it’s about them – it’s about ordinary people,” Hooper said. “I want this canvas to feel accessible, and from the community, to the community.”

“The Conversation” was commissioned by Federal Realty, which owns the building that serves as its facade. First conceived in 2019, “The Conversation” was a collaboration with Design Communication Ltd, which handled the manufacturing and integration of the technology; Street-Works Studio, which dealt with the element of town planning; and Daktronics, which worked with LED technology. Federal Realty used the Boston-based ILLUMINUS night festival – of which Hooper is the creative director – as inspiration for the project.

“There are all kinds of possibilities with the display that have allowed us to tap into what makes Somerville unique, interesting and cool,” said John Flaherty, Director of Development at Federal Realty. “Empty storefronts are not what we are looking for. Either way, we can bring art in and liven up the neighborhood, we will. “

Hooper and Flaherty both said they hope the facility serves as a place-making force for Assembly Row.

“So that the Somerville community can identify itself as a place where great art takes place, a place where artists are invited to create exciting and future-oriented works of art, at the cutting edge of technology and that make a statement, all of these things have a different impact than just creating tall buildings or gathering spaces, ”Hooper said.

Dana Gerber can be reached at dana.gerber@globe.com