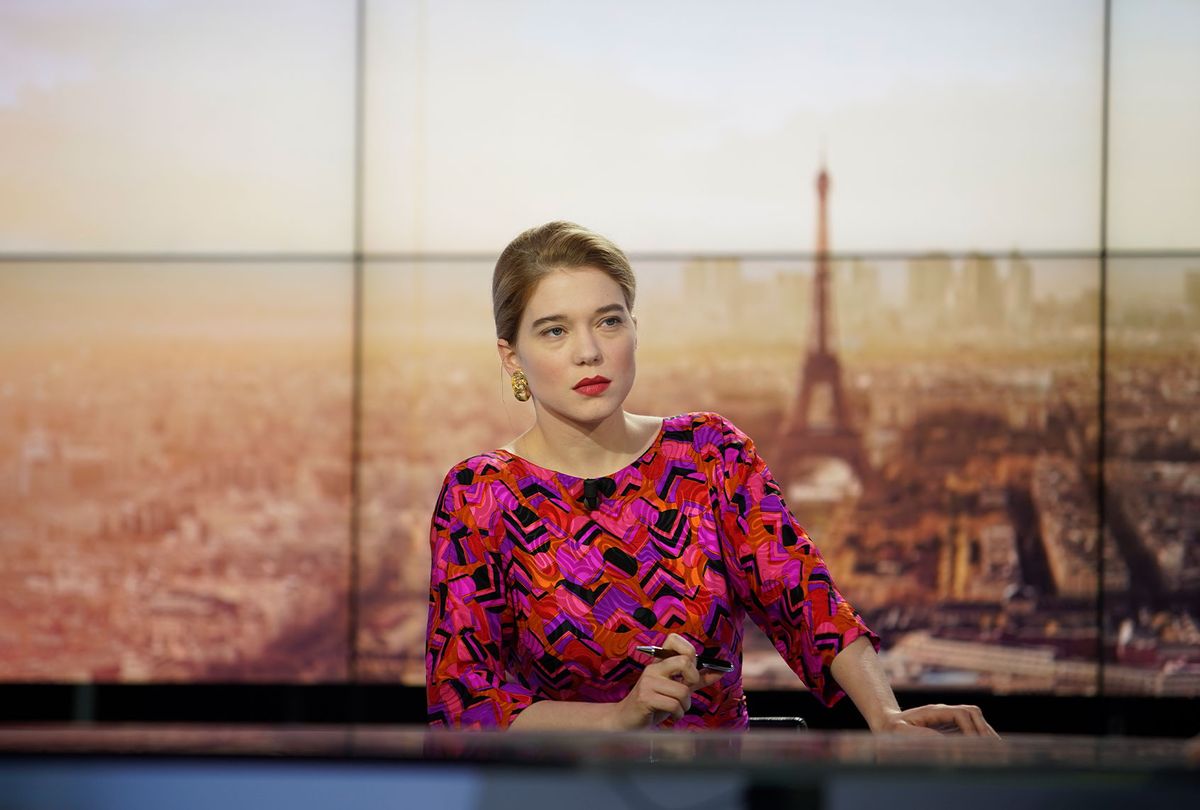 The director “France” Bruno Dumont on Léa Seydoux, digital media and how the “false can generate the truth”

“France” is the latest provocation from the enfant terrible, Bruno Dumont, whose films, “Humanité”, “Twentynine Palms” and “Hadewijch”, among others, polarize viewers. Dumont here raises many interesting questions about journalism, politics and canceled culture that are sure to spark debate.

France de Meurs (Léa Seydoux, from “Pas le temps de die”) is a popular television journalist in Paris who has developed a considerable reputation. In the opening scene, she asks President Macron a question about “the insurrectionary state of French society” during a press conference. (An actual event that was manipulated for the movie). It is going viral and France is becoming the darling of the media. His subsequent reports of war zones with armed loyalists confronting jihadists are odds-grabbers.

As she enjoys the privilege in her life, her image crumbles when she accidentally bumps into Baptiste (Jawad Zemmar) with his car. She admits her responsibility and makes up for it, but the incident also prompts France to acknowledge its own discontent. She quits her television job, checks in at a clinic in the Alps, and meets Charles (Emanuele Arioli), who ignores his fame.

RELATED: In “No Time to Die”, Daniel Craig receives an action-packed Bond send-off

Where does “France” go from there, it’s best to let viewers find out. But Dumont’s film thoughtfully critiques the media industry while deftly tackling issues of capitalism, privacy, EU sovereignty, immigrants and more.

The filmmaker spoke – with the help of performer Nicholas Elliott – with Salon des media, de la politique and his new film, “France”.

What struck me about your film was this idea of ​​what is artificial and what is real? The character of France lives in a rarefied world and uses his privilege for manipulation and calculation. What can you say about the film’s themes of truth and illusion? I love the opening scene of Macron playing himself in a press conference which is both true and false.

It shows you how the false can generate truth or reality. I think “France” is, indeed, a very artificial film about a very artificial world – a digital world. But what I was trying to do while making the film is to find the natural beyond the artifice, behind this lying and lying thing. Behind the artifice, there is a living heart, the heart of France, and all of us. That’s what interests me, this encounter that we have in the modern world, artifice and this thing behind, a heart. That’s why I’m interested in her as a protagonist. If it was entirely artificial, I don’t think I would be interested in it. What is interesting is that behind the artifice, there is this person who moves and who touches us.

Here you compare the media to politicians, but you also touch on celebrity culture and our fascination with selfies and autographs. What observations do you have on how TV personalities, as well as politicians, celebrities and even filmmakers are considered gods in today’s social media world? There is a fandom around France, but there is also a fandom around personalities, including you, Bruno Dumont.

I think that today there is a really surprising, astonishing proximity between the world of the digital screen and the world of cinema. The cinema is a fiction which generated the phenomenon of the movie star. What interests me today is that the digital world is repeating the writing or the style or the narration of cinema. Digital reality is told to us in a way that is fictional. It comes to us like a fiction. The politicians on these screens are fiction. Journalists are fiction. In a sense, the media and the movies do the same thing. France and Emmanuel Macron are movie stars, they are movie stars whose stories are overwhelmed by big and small screens.

Want a daily rundown of all the news and commentary Salon has to offer? Subscribe to our morning newsletter, Crash Course.

France as a character is sometimes enigmatic. She is powerful, determined, imperfect and likeable. I could argue that her guilt or privilege makes her feel like she deserves punishment. How did you conceive of his character?

I designed the character of Léa Seydoux; because the starting point of this adventure was my meeting with Léa Seydoux. There were two things: my interest in her star status and the natural woman I met. I liked its hypersensitivity and paradoxically the simplicity it has. There is a truth in her that we find in the contradiction between this star and this natural woman. I based the character of France on the artificial movie star, the artificial heroine we were talking about earlier, and all of this is supported by something simple, the daily life of Léa Seydoux, in particular her humor. He’s a very funny person. The character was entirely built on this complexity and this contradiction. I am used to working with natural and non-professional actors and there is a lot of naturalness and unprofessional aspect of Léa Seydoux in the composition of the character of France.

Did you have any obvious illusions about the country that shares his name?

I think so, the first name is quite suggestive of a whole country, but it is also quite accidental. The original title of the film was “On a Semi-Bright Morning” (which translates to “A Half-Light Morning.”) Since no one understood this title, I decided to name the film after its protagonist, and that of course gave it’s a connotation, it’s not a bad connotation, so i have no problem with that.

France “slams” at one point in the film. She feels guilty, she fights depression and she has an existential crisis. These are themes that you examine in several of your films. What prompts you to explore these topics, and what experiences have you yourself had in this regard?

The answer is a bit complicated, but it is a complicated question. I think the theme of redemption is one of the big themes in western culture and western art history. But what interests me about this film is that it allows me to work on the question of evil without entirely removing the possibility of redemption or good. Except that our whole Judeo-Christian tradition is outdated and has become somewhat irrelevant, or in the past.

What I find interesting, and what I’m looking for, is a very small form of human holiness. And I think that is the trajectory of France. When she realizes the negativity or the error of the path she is on, even though she plans for a while to use what she does to embrace some kind of low level humanism – helping the homeless or helping people in bad circumstances – she gives up on that, and she just continues to be a journalist, but she’s a journalist who has been raised a little, a minimum, and that little rise to true redemption is what interests me. It is human redemption to rise to where we are. We don’t have to put a lamb on our shoulder and go and find the truth. We find the truth where we are. If I am a filmmaker, it is to make better films. If I am a journalist, it is to write better articles. It’s a philosophical reflection that relates to the original title, which is a quote from Charles Péguy. What he is saying is that we are looking for the saint not in heaven but here on earth where we are.

France has suffered some setbacks, both personally and professionally in her career, but there are characters, like Danièle (Annick Lavieville), that France interviews who are interesting contrasts. What do you think of the culture of victims, as well as the culture of cancellation, at play in society today?

I think this is an absolutely fascinating question. This is called wokeism here in France. It’s a culture we say came from the United States, and it’s now overwhelming the whole world. It does this in particular thanks to digital technology. Digital culture induces this awakening society by its binary simplistic nature. Wokeism is a puritanical, destructive society that has been taken over by the Puritans, the modern day Huguenots who look at the world that way and it has become a kind of fascism. A fascism of the right-thinking and, one might say, of the politically correct.

The film takes place in this waking world. France lives in this world. The film looks like a photo novel in many ways, a very cheesy and silly thing, intentionally oversimplifying. His need for love is stupid, stupid. She herself is a bit stupid and dumb. Thanks to her awakening, she wakes up, but her holiness is not a revival holiness. She achieves a rudimentary holiness that is not at all stupid or foolish. Daniele as a person who is in the real world. She said, “If we cannot believe that someone who has done wrong can do good, we are lost. This is the opposite of wokeism, which maintains that this is not possible, in fact; if you do wrong, then that’s it. Daniele, who is in the truth of the natural, shows us that we can repair the evil, and that we can reintegrate the good.

Baptiste is a catalyst for his awakening. You address issues of capitalism, privacy, EU sovereignty, immigrants, etc. You have silly times where France makes rude gestures as it is about to show up in a war zone. What can you say about the tone of your film, which is satirical, but also sometimes comical?

I think the film chooses to mix genres. We have great genres – comedy, romance, melodrama, etc. The film mixes them all together. It’s like genres jostling in the film, and it’s a way of portraying the grotesque of tragedy and seriousness. That is, there is nothing serious, there is nothing funny. It’s all a mixture of good, bad, comedy and seriousness. This is something that interests me from an intellectual point of view. It helps me to avoid pontificating and not getting into one genre or another.

President Macron and even France speak of hope for a better future. But France will not even reveal what its political state of mind is. Does your film ask the viewer to be cynical about the future and the image makers who are supposed to give us hope?

“France” is not a sociological film. The character of France is like a filmic ectoplasm of us and of who we are, and it is in this film world of us that is artificial and natural. What is represented in “France” is not the media, it is what and who we are. This is what cinema does – it heroizes the viewer. The vocation of “France” is to represent us as we are, who we are. For the rest, I am not a prophet, I am not a teacher, and I am not a priest. My job as a filmmaker is to reveal the world and experience the world, and from there viewers will go and vote as they please and draw their own conclusions. We must let the cinema be cinema and not mix things up.

“France” is in theaters Friday, December 10. Watch a trailer below, via Youtube.